This infographic aims to present the latest available data on migrant flows to the EU in the years 2016 and 2017. It covers the detection of illegal crossings on the EU’s external borders, numbers of deaths of migrants on those crossings, the number of asylum applications in EU Member States and their decisions on those applications. 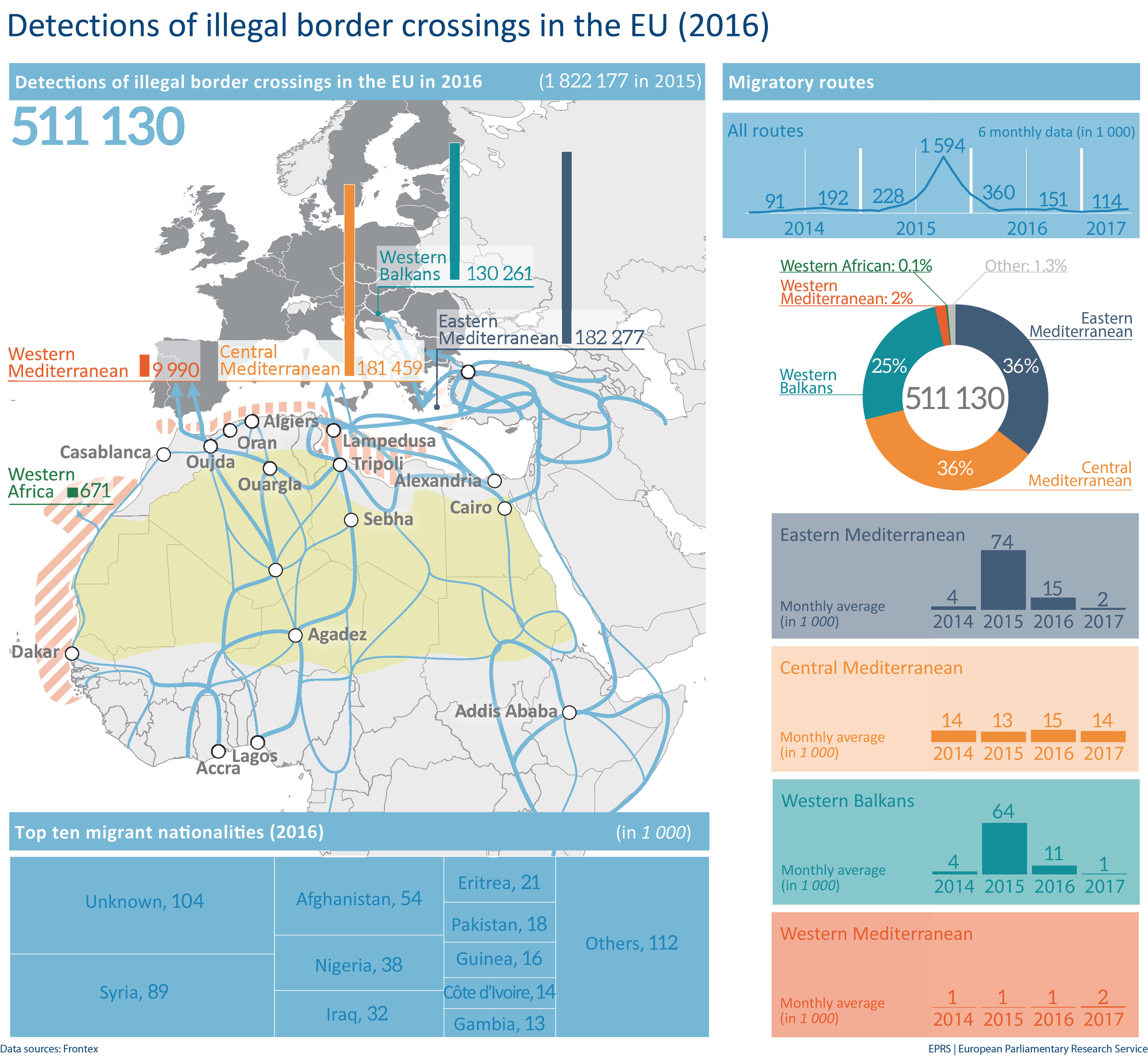 Detections of illegal border crossings in the EU (2016)

Download this infographic on ‘Recent migration flows to the EU‘ in PDF.

See also our briefing on ‘A global compact on migration: Placing human rights at the heart of migration management‘.

Detections of illegal border crossings in the EU (2017)

The International Organization for Migration (IOM) carries out the Missing Migrants project, aimed at compiling data on migrants who have died or gone missing, either at the external borders or in the migration process. It excludes, for instance, deaths in refugee camps or during return to a migrant’s homeland, or as a result of labour exploitation. Various sources of data are used such as relevant national authorities, IOM field missions, direct reporting by IOM and other organisations receiving survivors and media reports. IOM and UNHCR make sure that data are consistent.

The three boxes on the right represent the monthly average number of migrant deaths on the three Mediterranean routes in the last five years, as well as an estimated gender breakdown.

It can be seen, for instance, that in 2015, despite the increase in migrant flows in the Eastern Mediterranean (see previous page), the Central Mediterranean remained the more deadly route, with nearly two deaths for every 100 travellers.

Notes. Data on fatalities are challenging to collect because reporting on deaths is poor, countless bodies are never found and the involvement of criminal actors means there may be fear among survivors to report deaths, and some deaths may be actively covered up. For instance, in 2015, over 50% of deaths recorded by the Missing Migrants Project refer to migrants who are presumed dead and whose bodies have not been found (mainly at sea). The sex of the deceased is unknown in over 80% of cases.

Asylum applicants in the EU-28

The bar chart shows the number of asylum applicants in the European Union. ‘Applicants’ refers to anyone applying for asylum or similar protection – as defined in the Qualification Directive – or included in an application as a family member. The table shows the breakdown of those Member States which together represent more than 90% of the total requests for asylum in 2017.

The map shows the relative weight of the number of applicants per million inhabitants in the ‘country of arrival’ (the EU Member State in which asylum has been requested) for the year 2017. The EU average is 1 380 applicants per million inhabitants. The bar below the map shows the range of applicants within the Member States. The horizontal bar chart shows the top 20 countries of origin for the year 2017. The value in parenthesis represents changes with respect to 2016; a positive value shows an increase, negative a decrease (e.g. there was a decrease of 234 000 applicants from Syria in 2017 compared to the year 2016).

Notes. Asylum is a form of international protection given by a state on its territory to someone who is threatened by persecution on grounds of race, religion, nationality, membership of a particular group or political opinion in their country of origin or residence. In the EU, this consists of refugee status as defined in the UN Geneva Refugee Convention, plus subsidiary protection for persons who do not qualify as refugees but in respect of whom substantial grounds exist that the person concerned, if returned to their country of origin, would face a real risk of suffering serious harm as defined in the Qualification Directive.
Not all those who cross the EU’s external borders illegally will seek asylum, or indeed qualify under the definition above. They thus form part of the broader category of ‘irregular immigrants’, i.e. those who do not fulfil, or no longer fulfil, the conditions of entry as set out in Article 5 of the Schengen Borders Code or other conditions for entry, stay or residence in that Member State.Country code (ordered by number of asylum applicants in 2017): Germany (DE), Italy (IT), France (FR), Greece (EL), United Kingdom (UK), Spain (ES), Sweden (SE), Austria (AT), Belgium (BE). Others: Netherlands (NL), Poland (PL), Finland (FI), Romania (RO), Cyprus (CY), Bulgaria (BG), Hungary (HU), Denmark (DK), Ireland (IE), Luxembourg (LU), Malta (MT), Portugal (PT), Slovenia (SI), Czech Republic (CZ), Croatia (HR), Lithuania (LT), Latvia (LV), Estonia (EE) and Slovakia (SK))

First instance decisions on asylum in the EU-28

The number of asylum applicants and the number of first instance decisions during a given year differs. This is due to the time elapsed between a request being submitted and the decision. This time varies considerably, depending on national asylum procedures and the administrative workload of Member States.

Visit the European Parliament page on ‘Migration in Europe‘.